This past weekend was one of the awesomest weekends I can remember having recently – and that’s saying something, as I have had a lot of awesome weekends this summer. I took Friday off to spend it at Mysterium 2013, which was in Rochester this year, but my awesome weekend started off with enjoying the beautiful evening at Powder Mills Park before going to an intro to swing dance workshop until late. It was hot in the dance hall but fun to dance with the regulars eager to show me all their cool moves.

Friday morning I went over first thing to Mysterium. There are lots of photos on my Google+. The first panel didn’t start for a while so I fell into talking about my hobby Myst projects with other fans – and was eventually invited to put my work up on the screen at the front of the room, since so many people were crowded around my laptop to look and ask questions. (Inaltahv, Laboratory Scene, Geolab, and one more project that I’m just about done with…) That was really exciting, to show my stuff off to people who could really understand what had inspired those projects and could be as excited as I.

Next there was the presentation from The Starry Expanse Project (aka RealRiven; spoilers if you haven’t finished the game), a few fans who are developing, more or less on their own, a realtime version of the classic point-and-click adventure game Riven. They gave a good presentation – last we had seen, they had Prison Island modeled but not much more. This time, they showed us a wider variety of models, including the orange elevator room from Survey Island which produced much oohing and ahhing (about 8 minutes in). It was very exciting to see our beloved Riven come to life with rippling water and realtime motion. 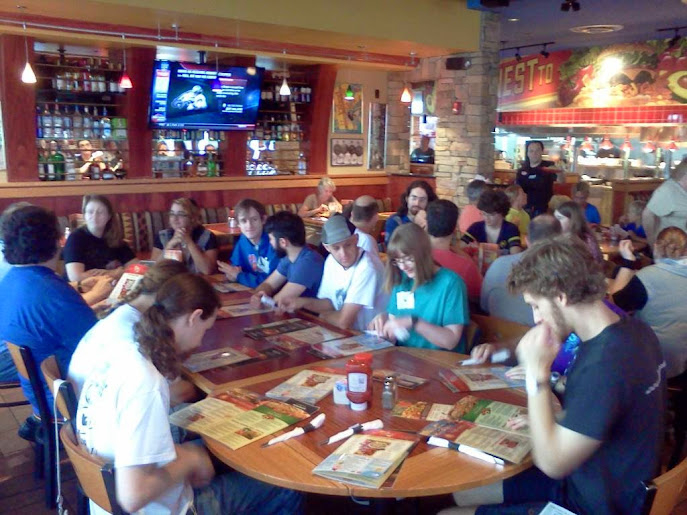 Most of us then trooped across the street to take up two long tables at Red Robin where we did our best to throw the waitstaff into a tizzy while getting to know each other better. Lunch took long enough that unfortunately most of us were unable to visit the museums in town as we had planned to do (I had really been looking forward to seeing the science museum with a couple of carloads of Myst fans, to see how they interacted with a science museum), but the live-action puzzle solving we did next made up for it.

The fans divided up into teams of about 4-8 people, and each got an hour to explore the conference room, which had been decked out in drapes, glowing lights, ambient music, and scattered with clues for us to unravel into a solution. In the pre-activity time, everyone pored over the journal written by a previous explorer, which would be an important reference once inside the room. My team did reasonably well, but like all the others there were a few things we missed. It was unbelievably fun to be involved in team puzzle-solving, pooling our brainpower and powers of observation to notice clues and suggest theories as to how the pieces might fit together, and to enjoy the feeling of success each time we were able to click two clues together into a logical solution. It was also exciting to take notes of theories and clues for a puzzle room, which I have rarely done. When our hour was up, my team went back outside to correlate our notes and do our best to come up with ideas even without the pieces in front of us. That was a pretty inspiring session to take part in – and when all the teams had had their turns in the room, we were all let in at once. Twenty people (or however many were there), all trying to come up with the solution at once was incredibly inspiring. There was no competition or unfriendliness, just everyone doing their utmost to contribute to finding a solution. We got pretty close to the solution before the moderators got sick of listening to us ringing the bells and playing the animal noise clips that were key to the sound puzzle, so everyone felt accomplished and happy when the moderators declared we had done well enough to “link” home. A large book with a linking image of the hotel taped to the inside cover was plunked down on the central table and everyone swarmed it to link home from Reahn together.

Next up was dinner at a pizza and ice cream place and then learning to play the card game version of Ahyoheek. Ahyoheek is the D’ni version of rock-paper-scissors, which can be played competitively against other players in Myst Online. Pen writes on book, book squashes beetle, beetle eats ink. 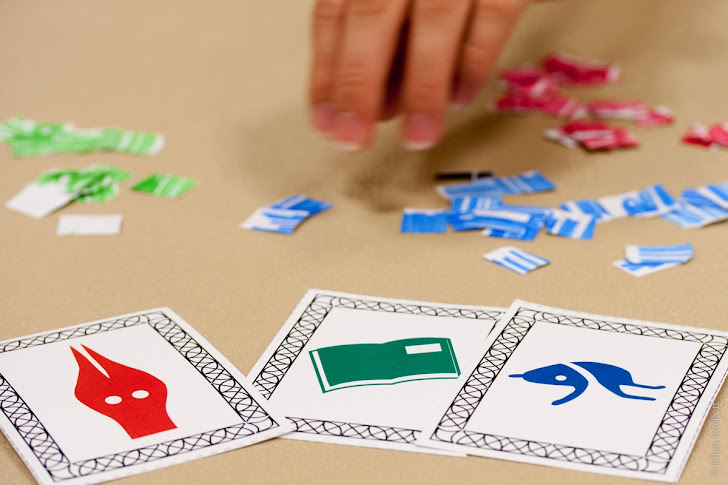 I did not have my camera Friday, but I did bring it Saturday. We spent the rest of the evening playing ‘heek, which was fun if rather repetitive.

Saturday morning I returned, camera in hand, to find everyone excited for another day. Check out the photo album linked by the photo above to see more photos.

Starting off the day was the Seltani panel, where Belford explained that his love of old-school text adventures had led him to single-handedly develop a sort of wiki-style text adventure engine. The idea is that anyone can sign up to “link in” to the D’ni city and find books that others have written, and explore them the same way you would in Myst Online – but in text adventure format. It’s even MMO – if you’re standing in the same spot as other online users, you can see them, interact, and chat with them. If you have writing privileges too (as probably everyone at Mysterium got), you can go to your own library and start writing an Age. It’s pretty time-consuming to write the description of each location (each screen you’d click between in the old game) and add links for pop-up “zoom” descriptions of specific items. You can also add small bits of code to determine if, for example, the generator’s fuel tank has been refilled by the user before turning the lights on. But, the result is something much more participatory than writing Ages for Myst Online, which requires graphics skills as well as programming and patience and who knows what else. At any given time during the rest of the weekend, at least a few people could be found playing with Seltani.

We went to lunch at Sticky Lips BBQ nearby, so now I have been to both of the major BBQ places in town. I have a lot of nerdy friends, but few of them get the Myst games, much less are in love with them. It was incredible to get to spend lunch talking about dreams we each had that were inspired by Myst. Text-based Age writing, illustrations, puzzles, 3D modeling tools, or better-written code – all of us had projects that combined our fanatical love of the Myst worlds with our own strengths and passions.

Over lunch, Orion showed us an awesome plugin he’s been working on for Unity 3D, which would allow people to model their Age, define nodes for the camera, do a little work of setting things up, and export as an Age that you can click through and look around.

Then the highlight of the entire weekend – a skype Q&A with Robyn Miller himself! One of the founders of Cyan, Robyn played Sirrus in the original Myst, composed the music for Myst and Riven, and did a large part of the art direction and general decision-making for both games. Listening to him talk, and being taken back to childhood memories of repeatedly watching “The Making of Myst” in fascination, I realized that this guy may have singlehandedly had the biggest impact on my career choice. Not that I make beautiful 3D games now – but it definitely got me into digital design.

Although I’m sure meeting either Robyn or Rand in person would surpass the excitement, getting to hear him answer questions in real time might have been one of the top exciting moments in my life so far, along with getting to shake hands with John Linnell when Gigantic came out.

And once the moderators had gotten through the questions that had been submitted in advance, they opened up the forum – which meant I got to ask Robyn Miller a question myself! Aaaahhh! It was so exciting because I had been figuring there was no way I could come up with a worthy question, much less ask it in a self-posessed way – but when he alluded partway through the interview to being dissatisfied with the difference in visual style after Riven, I knew what question I would ask (). It was so great to get to hear about something I’ve always wondered about – how the creators themselves see the Myst visual style. I think most Myst fans have a specific look they recognize as looking like Myst – but presumably the brothers themselves would see the game quite differently. So when they opened the floor for questions, I was ready to jump out of my chair.

I was ready to start squeeing when he asked if he had answered my question – and I definitely could have asked him further questions – but I figured I had had my one question and I shouldn’t take up the floor any longer.

When everyone had gotten their turn, we wrapped up the interview and moved on to “What would Atrus build?” which involved teams of people being given piles of rubble, out of which they had to construct (and subsequently explain) something that Atrus might have lying around his laboratories. And the rest of the evening was taken up by a trip to Highland Park for dinner. 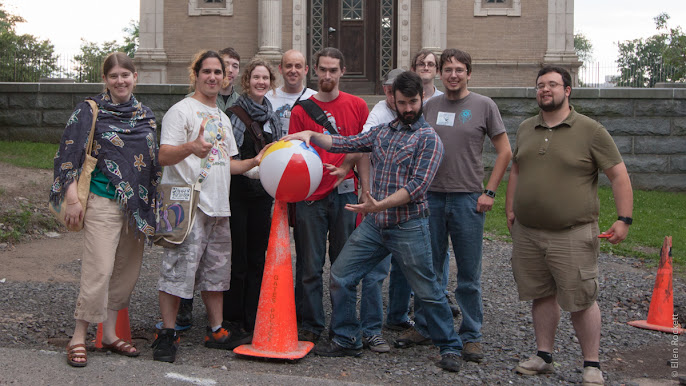 We did a bit of exploring, took lots of pictures, and played for a long time with Eddy the bevin beach ball. (Eddy is a toy in an area of Myst Online, named after the county where some people think the game starts. There were also construction cones, which show up frequently in the City.)

There was also more ‘heek playing, as well as other games, and lots of people poking at the Seltani project … all of which continued in to Sunday. Sunday was much more sleepy though, as everyone waited for their coffee to kick in and passed the time until their flights home.

Since I live in Rochester, however, I had no flight to catch, and spent the afternoon wandering around the Park Ave fest, which was pretty awesome. There were a number of really talented artists that made me wish I had the money to buy beautiful paintings.

This bubble guy looked like quite a character. I loved his colorful dress and serious hippie look, as well as his pleasure in just making lots of bubbles. It was nice to see a few of my friends there too: